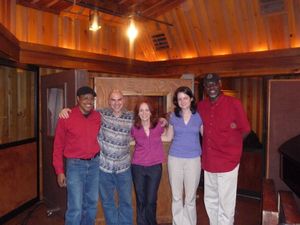 Andrea Wolper Accomplished and at home with a variety of styles, from the Great American Songbook to spontaneous improvisation, Andrea Wolper is also a creative songwriter, lyricist, and arranger. One of her original songs, "Not Sleeping in Your Arms" (from her 2005 release, "The Small Hours"), is the third most downloaded track of all time at AllAboutJazz.com, and "The Girls in Their Dresses," from 2011's "Parallel Lives" is already climbing the AAJ charts. She appears frequently in the New York area, and tours in the United States and abroad. For a complete bio please click here.

Kris Davis In 2010, The New York Times said, "Over the last couple of years in New York one method for deciding where to hear jazz on a given night has been to track down the pianist Kris Davis." In addition to her efforts as a bandleader, Canadian Kris Davis has performed with John Hollenbeck's Large Ensemble, Theo Bleckmann, Ingrid Laubrock, Tyshawn Sorey, Ron Horton, Ingrid Jensen, Steve Swell, Andrea Wolper, Sara Serpa, Peter Herbert and Chris Speed. She has several releases as leader or co-leader on the Clean Feed and Fresh Sound labels. She performs regularly as a sideman for numerous up-and-coming leaders, such as Jon Irabagon and Tony Barba, and plays harmonium in the Brooklyn Qawwali Party. Davis teaches at the Maine Jazz Camp and the Preparatory Jazz studies program at Queens College.

Michael K. Howell Originally from Kansas City, MO, Michael Howell was inspired and taught by his father and by noted KC guitarist Herley Dennis. Michael has performed and recorded with his own group, as well as with a stellar list of musicians that includes Bobby Hutchenson, Hampton Hawes, Art Blakey, Gene Ammons, Woody Show, and George Duke. He recorded three solo albums, "Alone" on Catalyst Records, and "Looking Glass" and "In The Silence" on Mile Stone Records. He has toured with the Boys' Choir of Harlem, and for five years toured with Dizzy Gillespie. He performed as a special guest at the Monterey Jazz Festival Guitar Summit which also included guitarist Joe Pass, Mondell Lowe, Jim Hall, and Lee Riteniur. Michael has performed on a number of television shows including the PBS show, "From Jump Street: The Story of Black Music," hosted by Oscar Brown, Jr. Michael has taught at the Brooklyn Conservatory of Music, Lucy Moses School for Music, and at the JazzMobile Workshop (1990 - present). Michael is the guitarist at the new Minton's.

§ Michael TA Thompson Hailing from St. Thomas, Michael T.A. Thompson calls his work "soundrhythium"; much more than a drummer, Michael plays as he breathes, hearing everything and playing in a way that's ever inventive and responsive. Michael has performed and recorded with a wide variety of artists including Joe McPhee, Oliver Lake, Kid Jordan, Matthew Shipp, Roy Campbell, Jr., Uri Caine, Barbara Sfraga, Marc Ribot, William Parker, Sherry Winston, the legendary Clypsonians, The Mighty Sparrow, The Shadow, Beckett, reggae artist Owen Gray, and artists from classical to rap and beyond. Thompson produces New York-based artists who are pushing the musical envelope and making an impact on today's jazz performance scene. He has recorded for television shows such as "Blue's Clues" (Nickelodeon), and for commercials and film scores.


§ Village Voice 2009 Jazz Poll: Tom Hull's Alternate, Unsettled Top 10: "I'd also like to point out that anything with Ralph Alessi on trumpet, Ellery Eskelin or Tony Malaby on tenor sax, Ken Filiano or John Hebert on bass, and/or Tom Rainey or Michael TA Thompson on drums is practically guaranteed to be superb."